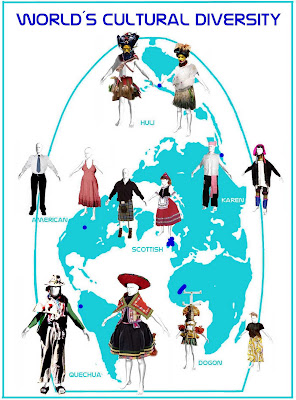 In 1908 Israel Zangwill first staged his play which depicts the life of a Russian-Jewish immigrant family, the Quixanos. David Quixano has survived a pogrom (form of riot directed against a particular group), which killed his mother and sister, and he wishes to forget this horrible event. He composes an "American Symphony" and wants to look forward to a society free of ethnic divisions and hatred, rather than backward at his traumatic past. The name of the play is Melting Pot. It did great when opened, and was even praised by President Theodore Roosevelt.

The idea of "melting" as a metaphor for ethnic assimilation had been used before but Zangwill was the first to use the term "melting pot" as a symbol for this occurrence in American society.

The melting pot refers to the way in which homogeneous societies interacts, in which the ingredients in the pot (people of different cultures, races and religions) are combined so as to develop a multi-ethnic society.
The diversity of human culture is infinite; Ethnologue, a web encyclopedia that plans to catalogue all worlds’ living languages has already data of 6,912 different languages. Cultures and races fall into a comparable number.
Cultural diversity undoubtedly is what makes our society successful! It is what brought Europe into the Renaissance. It brings new ideas and ways of blending thoughts and ideas into something greater than the original. Great art, literature and science all came when cultures melted in the Pot.
Since humans emerged in Africa about two million years ago we have spread throughout the world, adapting to widely differing conditions and to periodic cataclysmic changes in local and global climate. The many separate societies that emerged around the globe differed markedly from each other, and many of these differences persist to this day.
In that sense UNESCO Universal Declaration on Cultural Diversity, adopted by 185 Member States in 2001, represents the first international standard-setting instrument aimed at preserving and promoting cultural diversity and intercultural dialogue.
The Declaration puts in the first article that “Cultural diversity is as necessary for humankind as biodiversity is for nature” and goes on to assure policies for the inclusion and participation of all citizens and guarantees social cohesion, in order to increase the vitality of world society and world peace.We are not only members of the human species. We also belong to states, nations or ethnic groups. Ethnic identity and the feeling of belonging to a particular group of people should be maintained and valued in a peaceful and harmonious fashion.
Postado por Luiz Pagano às 5:13 PM