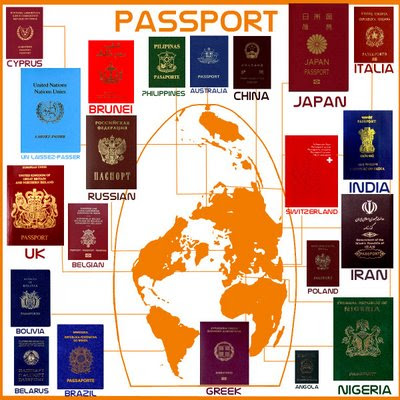 Nehemiah the man that rebuilt Jerusalem 150 years after it was destroyed by King Nebuchadnezzar over an astounding 52-day span, was also the also the first person in history to have a passport; he asked the king Artaxerxes permission to leave to travel to Judea, and the king granted him a letter "to the governors beyond the river" requesting safe passage for him as he traveled through their lands.

Safe Conducts were issued in 1414 (the earliest passports) in an Act of Parliament during the reign of King Henry V, in 1540 The Privy Council Register begins, leaving us a record of Privy Council business. According to the Register, this includes granting passports. But it was only in June 18th that King Charles I issued and signed a passport (this document still exists).
The word Passport derives from a document required to pass through the gate ("porte") of a city wall in medieval Europe. Until 1772, passports were written in Latin or English. From this date onwards they began to be written in French. (see more in http://www.ips.gov.uk/passport/about-history.asp ).
Up to World War I, passports were not required for international travel in Europe, and crossing a border was extremely easy. During World War I, European governments introduced border passport requirements for security reasons (to keep out spies) and to control emigration of citizens with useful skills, and retaining potential manpower. These controls remained in place after the war, and became standard procedure, though not without controversy. British tourists of the 1920s complained, especially about attached photographs and physical descriptions, which they considered led to a "nasty dehumanisation".
In 1920, the League of Nations held a conference on passports and through tickets. Passport guidelines resulted from the conference, which was followed up by conferences in 1926 and 1927.
The United Nations held a travel conference in 1963, but passport guidelines did not result from it. Passport standardisation came about in 1980, under the auspices of the International Civil Aviation Organization, ICAO.

Machine-readable passport
A machine readable passport (MRP) is a passport where the data on the identity page is encoded in optical character recognition format. Most travel passports world-wide are MRPs. They are standardized by the ICAO Document 9303 (endorsed by the International Organization for Standardization and the International Electrotechnical Commission as ISO/IEC 7501-1) and have a special Machine Readable Passport Zone, which is usually at the end of a passport. It spans two lines and each line is 44 characters long. The following information is provided in the zone: name, passport number, two check digits, nationality, date of birth, sex, passport expiration date and personal identity number.
In early 2006 Pakistan become the first country in the world to issue a passport using both machine readable passports and Automated Finger Identification and Facial Recognition system Biometrics technology.
The advantages of machine readable passports include:
- faster processing of arriving passengers by immigration officials;
- more secure, compared to the manually read passports that preceded them, since the data read by the machine would always be the same as the data in the Machine Readable Passport Zone;

Between 2003 and 2005 the United States progressively introduced regulations that make machine readable passports mandatory for those entering the U.S. under the Visa Waiver Program. 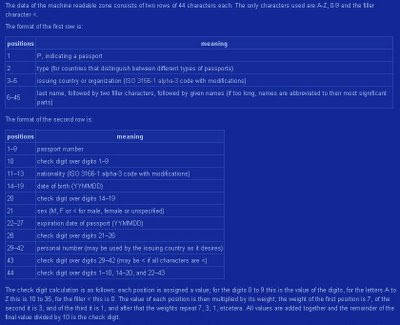 The Visa Waiver Program (VWP) is a program of the United States of America which allows citizens of specific countries to travel to the US for tourism or business for up to 90 days without having to obtain a visa. All countries participating in the program have high HDI and most are regarded as developed countries.
As of 2006, 27 countries were designated as VWP participants:
Europe (22)
Andorra, Austria, Belgium, Denmark, Finland, France (including French overseas territories), Germany, Iceland, Ireland, Italy, Liechtenstein, Luxembourg, Monaco, the Netherlands, Norway, Portugal, San Marino, Slovenia, Spain, Sweden, Switzerland, the United Kingdom.
Asia (3)
Brunei, Japan, Singapore
Oceania (2)
Australia, New Zealand
During his visit to Estonia in November 2006, President Bush announced his intention "to work with our Congress and our international partners to modify our visa waiver program". Recently (July 2007) the Congress and the senate passed the Secure Travel and Counterterrorism Partnership Act, directing the secretary of Homeland Security to establish a pilot program to expand the visa waiver program for up to five new countries that are cooperating with the US on security and counterterrorism matters. This new act changes the nonimmigrant visa refusal rate threshold - from 3% - to 10%, thus making (as of 2008) 30 countries[13] qualify for inclusion in the visa-waiver program: Argentina, Bahamas, Bahrain, Brazil, Chile, Cyprus, Croatia, Czech Republic, Estonia, Greece, Hong Kong (HKSAR passport and British National (Overseas) passport), Israel, Kuwait, Macao, Malaysia, Malta, Namibia, Nauru, Oman, Qatar, Sao Tome and Principe, Saudi Arabia, Solomon Islands, South Africa, South Korea, Taiwan, Timor Leste, United Arab Emirates, Uruguay, and Vatican City. 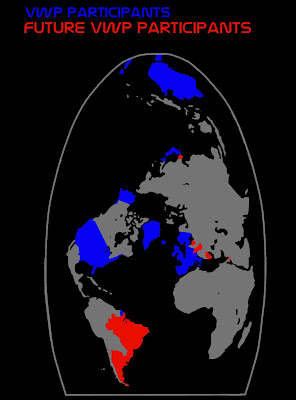 Generally standardized terminology related to passports:
Ordinary passport, also called tourist passport
Issued to average citizens.
Official passport, also called service passport
Issued to government employees for work-related travel, and to accompanying dependents.
Diplomatic passport
Issued to diplomats and consuls for work-related travel, and to accompanying dependents. Having a diplomatic passport is not the equivalent of having diplomatic immunity. A grant of diplomatic status, a privilege of which is diplomatic immunity, has to come from the government of the country in relation to which diplomatic status is claimed. Also, having a diplomatic passport does not mean visa-free travel. A holder of a diplomatic passport usually has to obtain a diplomatic visa, even if a holder of an ordinary passport may enter a country visa-free or may obtain a visa on arrival.
In exceptional circumstances, a diplomatic passport is given to a foreign citizen with no passport of his own, such as an exiled VIP who lives, by invitation, in a foreign country.
Emergency passport, also called temporary passport
Issued to persons whose passports were lost or stolen, and who do not have time to obtain replacement passports.
Collective passport
Issued to defined groups for travel together to particular destinations, such as a group of school children on a school trip to a specified country.
Family passport
Issued to family members -- father, mother, son, daughter. There is one passport holder. He may travel alone, or with another family member, or with other family members. A family member who is not the passport holder must travel with the passport holder.
Laissez-passer
A document which is not a passport, but which serves the function of a passport. Laissez-passer are issued by international organisations to their officers and employees for official travel.
Alien's passport
A document which is not a passport, but is a travel document issued under certain circumstances, such as statelessness, to non-citizen residents.
In Latvia, an alien's passport is a passport for residents to whom the government denied citizenship and associated rights. It is used as an internal passport inside Latvia, and as a travel document outside Latvia.
Internal passport
A document which is not a passport, but is an identity document which controls movement within a country. Examples: the internal passport of the former Soviet Union and present Russia; the hukou residence-registration system in mainland China; or the REAL ID of the United States.
Kinds of Passport in Brazil:
Blue: Common passport;
Green: official assport;
Red: diplomatic;
Brown: “laissez-passer;
Yellow: refugees;
Light-blue: emergency passport. 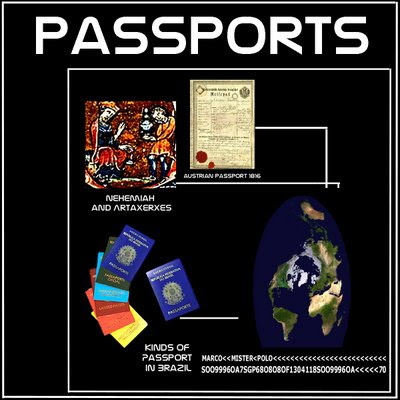 United Nations Laissez-Passer
United Nations Laissez-Passer (UNLP or LP) is a travel document issued by the United Nations to its staff, under the provisions of Article VII of the 1946 Convention on the Privileges and Immunities of the United Nations.
The UNLP is a valid travel document, which can be used like a national passport. Just like for national passports, some countries accept it for entry without the need for a visa (e.g. Germany, Kenya, United Kingdom), while most require a visa to be issued in it before it can be accepted for entry to the country. This is regardless of the nationality of the staff member.
Postado por Luiz Pagano às 10:25 PM No comments: