The Tupis of Rugby

There is an unexplored Brazilian asset, with enormous economic potential, scalable, capable of becoming a strong agent of social change, with the power to praise Brazilian culture abroad and still promote a great strategic advantage in the preservation of Brazilian indigenous tribes and, consequently, our threatened biomes – THE CAUIM.
leia esse artigo em Português
It is important to say that CAUIM, a 100% fermented manioc drink, is produced in a large part of the Brazilian territory, by the more than 305 remaining ethnic groups and was probably produced by hundreds of others already extinct, millennia before the arrival of European settlers.
Even today it is consumed as part of rituals, which differ among indigenous nations, belonging to ancient oral traditions, preserved by elders - this drink and all its cultural/religious context should in no way be reduced to an element of commerce - no that's what we're talking about here.
I am referring to a commercially produced drink, whose salivary amylase, used in indigenous villages, was replaced by industrial processes, fruits of the work I have been doing, together with a small group of scholars, which gave rise to Cauim Tiakau.
HOW CAUIM CAN BE THAT AGENT OF TRANSFORMATION
In Brazil, we face a harsh reality, the Amazon forest, the swamp, the cerrado, the Atlantic forest and other Brazilian biomes are in contoiuous threat, and have become the stage for national and international political disputes.
Apart from political issues, there are several agents that corroborate this, such as prospectors, land grabbers, loggers, predatory farmers and invaders in general, who are motivated, violent agents and holders of financial resources, which allow them to afford good lawyers, lobbyists, and corrupt means to perpetuate their actions.
Indigenous peoples, the great defenders of our forests, are naked and crudely exposed to this nightmare, they are at risk of being mercilessly decimated, in a desperate battle with almost no prospects of victory. To make matters worse, many villages opt for the oral tradition, so that these ethnic groups can disappear without even leaving a cultural record of their existence.
You don't protect the forest or the ethnic groups, putting a dome over them, the idea is to strengthen the so-called preservation cells individually, through intellectual and monetary training.
The external assistance provided by FUNAI, ICMBio, NGOs and other institutions is commendable, but still insufficient in the current scenario. The ideal would be to have robust and efficient preservation cells, in all social spheres, without losing its essence - Cauim perfectly fulfills this function.
PRODUCTION AND FEASIBILITY COSTS
As for the raw material, the only prerequisite is cassava, a basic raw material, which is produced in an indigenous village, with cassava planted in the middle of the forest through an agroforestry system, without trees being felled, so that it is not characterized as a monoculture. 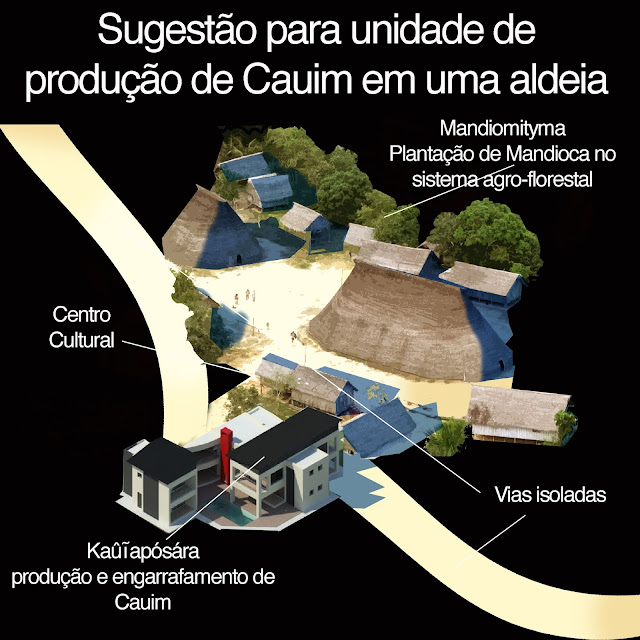 The production can be very small, at first, always in harmony with nature, without pesticides, so that its scarcity justifies a premium price, as with drinks produced in the Champagne region;
The basic structure of a production unit is not different from the backyard micro breweries, quite common in recent years. For the production of 100 liters of Cauim, a cooking pot, a 100-liter tank and a chiller are needed, budgeted at approximately R$60,000.00;
Glass bottles must be very characteristic and returnable, reverse logistics may be a mandatory point in production plants.
At first we will have a business structure in São Paulo, at first, which may expand to other regions of Brazil - however, nothing prevents the business from growing organically, in a different region, according to the dynamics and needs of the investor / ethnicities adherents to the project.
That said, I would like you to know that the first time I had success with the saccharification and fermentation of cassava, it was on a holiday of Our Lady, with my experiences in my studio.
After that, coincidentally, I made great advances in the project on that same date in the following years, one of them at the Pernod Ricard de Rezende unit, close to the Sanctuary of Aparecida - So I suggest as patron saint for this project Nossa Senhora de Aparecdia.
If you are interested in making this project possible, please contact me, @luizpagano or my partners in this endeavor, Hildo Sena and Cassio Cunha.
T'ereîkokatu ('cheers' in Old Tupi).
Postado por Luiz Pagano às 8:27 AM No comments: