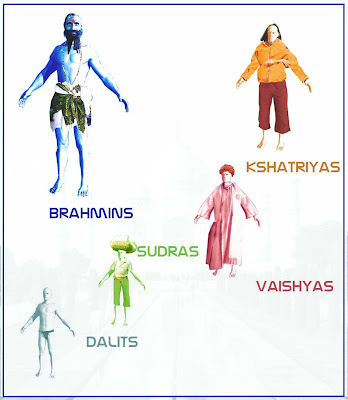 The Indian caste system is related to social stratification and social restrictions in India, in which social classes are defined by hereditary groups often termed as jātis or castes. Within a jāti there exist exogamous groups known as gotras, the lineage or clan of a person, although in a handful of sub-castes like Shakadvipi endogamy within a gotra is permitted and alternative mechanisms of restricting endogamy are used.

Although generally identified with Hinduism, the caste system was also observed among followers of other religions in the Indian subcontinent, including some groups of Muslims and Christians. The Indian Constitution has outlawed caste-based discrimination, in keeping with the socialist, secular, democratic principles that founded the nation. Caste barriers have mostly broken down in large cities, though persist in rural areas of the country. The caste system, in various forms, does continue to play a major role in the Indian society and politics.

According to the ancient Hindu scriptures, there are five "varnas”:
The Brahmins (teachers, scholars and priests);
The Kshatriyas (kings and warriors);
The Vaishyas (traders);
The Sudras (agriculturists, service providers, and some artisan groups). Offspring of different varnas belong to different Jātis;The Dalits, another group excluded from the main society was called Parjanya or Antyaja. This group of former "untouchables" (now called Dalits) was considered either the lower section of Shudras or outside the caste system altogether.
Postado por Luiz Pagano às 10:25 PM