“Emperors and kings, dukes and marquises, counts, knights, and townsfolk, and all people who wish to know the various races of men and the peculiarities of the various regions of the world, take this book and have it read to you. Here you will find all the great wonders and curiosities of Greater Armenia and Persia, of the Tartars and of India, and of many other territories. Our book will relate them to you plainly in due order, as they were related by Messer Marco Polo, a wise and noble citizen of Venice, who has seen them with his own eyes. There is also much here that he has not seen but has heard from men of credit and veracity. We will set down things seen as seen, things heard as heard, so that our book may be an accurate record, free from any sort of fabrication.”

Marco Polo was born in Venetian Republic in September 15, 1254 died in his home on January 9, 1324, was a Venetian trader and explorer who gained fame for his worldwide travels, recorded in the book Il Milione ("The Million" or The Travels of Marco Polo).

Polo, together with his father Niccolo and his uncle Maffeo, was one of the first Westerners to travel the Silk Road to China and visit the Great Khan of the Mongol Empire, Kublai Khan. At Khan’s service Marco went to Tartaria, China and Indochina. On their return to Venice, Marco spent the few months commanding a ship in a war against Genoa, ending up as prisoner. During the imprisonment he dictated to a fellow prisoner, Rustichello da Pisa, a detailed account of his travels in the then-unknown parts of China, further translated to Latin by Franciscan friar Francesco Pipino. Printed in 1485 in many other idioms.

His travel histories have inhabited the reader's mind all over the world and the richness of details and emotion of the wonderful and even fantastic narrative have always caused commotion. 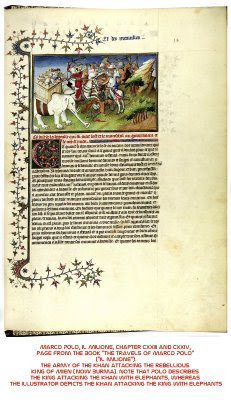 Marco Polo's travels may have been the starting point of the integration consumer market among different cultures of the world.

But what really fascinate me in his narratives are the different legendary creatures founded, such as from Tanguibar Islands, where giant people use to live side by side with cynocephalus. The enormous serpent from Caragian region, the Sciapodes - Men with a single, large foot extending from one thick leg centered in the middle of their body and Salamander “Salamander is neither beastes nor Serpent, and from thence they doe gather that whiche is called Salamandra, which is a threede they doe make cloth of” and finally – Blemyas.

Blemyas are the perfect synthesis of the bizarre, something that causes extreme fear and at the same time curiosity, strangeness, fascination and wander of traveling.

On the process for deciding the name of this blog and choosing the name of the main character, I wanted to show that business travel won’t have to be mechanical, cold and non-interesting, that we should not regard our attitude towards globalized world as a strange afternoon watching CNN reports on terrorist attacks and death.
It is more like Body Shop’s Anita Roddick ecological militancy, or Richard Branson’s radical leadership and passion for his company or even a Brazilian dressmaker that exports using easy mail export “Exporta Fácil” .

As well as an interconnected meteorological system, where butterfly's wings air movements in Japan might create tiny changes in the atmosphere that ultimately cause a storm in Europe, the attitude of leaving home to a nearby newsstand in order to buy a newspaper might create big changes in Times Warner shares.

Be part of it; try to narrate your travel experiences and even the Blemyas that may cross your ways.
Postado por Luiz Pagano às 6:27 PM