The Future of our civilization in 3 steps 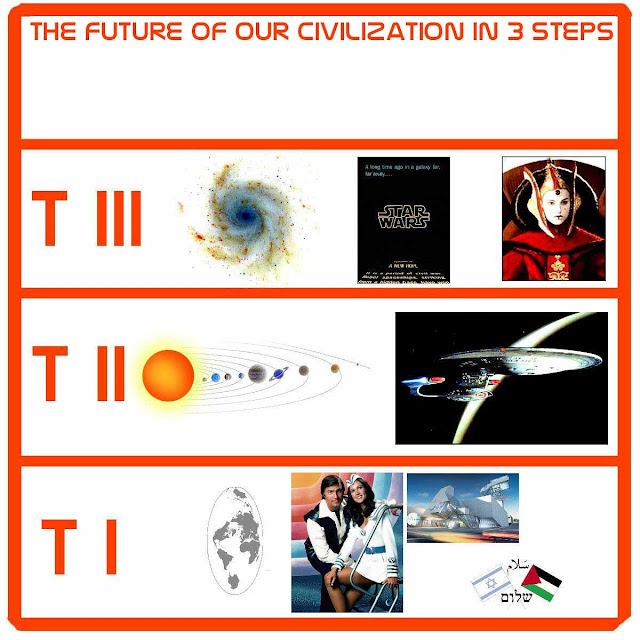 The begin of year 1963 was a very important year for civilization as we know, Russian astronomer Nikolai Semenovich Kardashev (Никола́й Семёнович Кардашёв – born on April 25, 1932 in Moscow) was examining quasar CTA-102 in the first Soviet quest in the search for extraterrestrial intelligence and started to philosophate about extraterrestrial life and all achievements of mankind.

The basic ingredient for a decent standard life and to improve a society to prosperous levels is ENERGY. At the present moment we humans are getting most of the energy we need from dead plants and animals on the planet turned into coal, oil, etc.

We are now in type 0 (ZERO) civilization because at the present moment, we are not able to achieve mastery of the resources on Earth. Far from it, we had almost destroyed ourselves many times during cold war, the best known of these episodes was in 1962 when military intervention by the United States in Cuba, that almost triggered a nuclear war perfectably capable of human race annihilation. That was the so called “Bay of Pigs episode”.

Japanese-American theoretical physicist Michiuo Kaku (加來 道雄 - January 24, 1947) says that the transition form type 0 to type 1 civilization could be the most dangerous period that a civilization can face. Mathematicians says that could exist thousands of Type 1 Civilization in the galaxy, and if is so, why we have not seen them yet?

Kaku says that in one hand we have cultural tolerance, good scientific growth, integration, but in other hand we have nuclear weapons, terrorism that works as obstacles to reaching Type I Civilization status. Perhaps no other civilization could make it to transform itself from a Type 0 into a Type I.

The current status of human civilization has thus been named Type 0. Although intermediate values were not discussed in Kardashev's original proposal, American astronomer Carl Sagan (November 9, 1934 – December 20, 1996) calculated in 1973 grades between 0 and 1 in HUMANITY’S CIVILIZATION TYPE – HCT he stipulated that at that point Earth was to be 0.7, in relationship to Kardashev's model for Types 0 and I 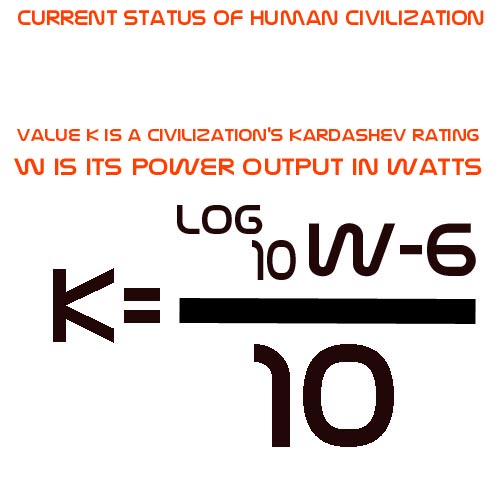 Kaku posted that in 1900 our HCT was 0,58, in 2004 was 0,72 and that if we make use of large scale application of fusion power, Anti-matter production to be used in antimatter-matter collisions power plants, Solar energy, converting sunlight into electricity by either solar cells, etc. in the year 2100 we could get out of zero and reach HCT I.

The Great leap into a Type I civilization also encompasses economical and political changes, maybe in year 2110 could be read in headlines of the newspapers “Today was signed the first planetary trading block, we could buy antimatter from VULCANO with paying taxes” or “Despite all Chinese efforts English was approved as the new interplanetary official language”.

Even if in our Type I economy English would be the “planetary idiom” other languages will be spoken because people will have time and resources to stud and enjoy their own culture, cultural tolerance will tend grow with no limits because people learned from the process of reaching Type I that diversity was the great ingredient of evolution, poverty will be extinguished, because “now we can explore other planets and make use of abundant resources” , enterprises will not enter into a new business because of money; instead, they will pay more attention to improve employee’s personal skills, they will realize that this is the best way to prosper in a resourceful planetary system. Type I political system (adopted as one in the whole planet) is more equitable and maybe democracy will be replaced by “total democracy” (I have no idea how that would work).

Understanding our reality and the forces that could lead us into a Type I, II or III civilization, we could be the race (maybe the first) that will prosper beyond the limits of a planet, solar system or galaxy.
Postado por Luiz Pagano às 2:05 PM No comments: