You tell the story - Travel through Space and Time: The IV Dynasty of Egypt 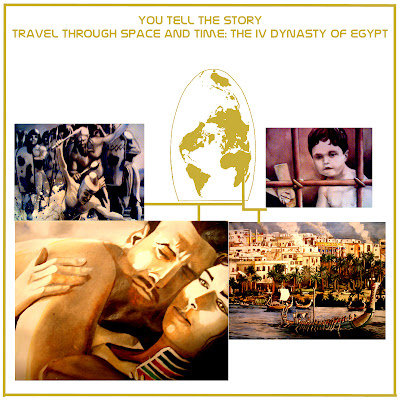 If Blemya is a blog dedicated to cool places and things in the world, travel, etc. why not to write about space and TIME travel?

My idea was to write about the ancient Egypt during the IV Dynasty, the economy, the places, etc. With that intent in my earlier days I went to the library for research, I’ve found books there were often, out-of-date, bias, poorly reasearched. Then I tried to continue my search in internet, and I came across articles about open codes that other software developers have all been using.

I decided to create the blog

Then came the idea, why not write an open story, I could use all data available about Pharaoh Sneferu, Rahotep and Nofret, Cheops, as platform and readers will be able to fill in the blanks. Maybe Nofret had an affair with Prince Nefermaat, vizier to King Sneferu.

The history begins at September 13th 2589 (Year 4 from coronation date, day 27, month paopi, season of the overflow of Nile river of his Magesty, Sneferu - The King of Upper and Low[er] Egypt) - day of the Festival of lighting the fires of Neith, with two time/space travelers: the young Luiz Pagano and his lion. They arrived in a flashlight right in the middle of a battle between the Egyptians and the Monitu.

Egyptians had conquered Monitu and forced them to pay tribute and for this purpose it was necessary to hold the country by a set of military posts. Pharaoh Sneferu’s employees use to mine in Wady Maghara (land of Monitu) and in this particular night the presence of the boy and the lion aggravates a quarrel between two nations.

An opportunist Monitu soldier took advantage from the chaos caused by the arrival of the time travelers and hit Keops (son of Sneferu) in the head.

Khufu (in Greek known as Χέωψ, Cheops; pronounced "key-ops") was son of Sneferu, second Pharaoh of Ancient Egypt's Old Kingdom. He reigned from 2589 BC to 2566 BC.

Sneferu, was the founder of the Fourth dynasty of Egypt, reigning from 2613 BC to 2589 bC. He used to call himself Neter aa, "the Great God," and Neb mat, "the Lord of Justice." He is also "the Golden Horus," or "the Conqueror." runs to help his son...

If you want to know more click on http://www.youtellthestory.blogspot.com/

You will continue it…..
Postado por Luiz Pagano às 2:13 PM