Future of the society 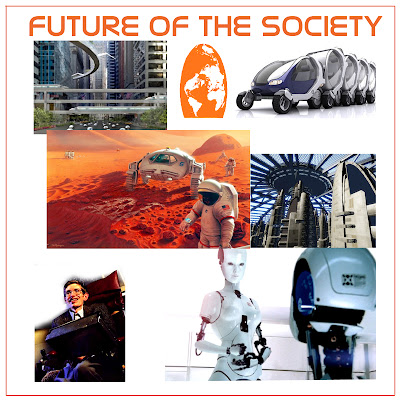 Almost 40 years ago an American writer and futurist, Alvin Toffler amused us when he and his wife Heidi depicted digital revolution, communications revolution, corporate revolution in his book Future Shock (1970 - Bantam Books).

Most of his predictions are now part of our day life, they were right!

Maybe Charles Darwin had the answer: “It is not the strongest of the species that survive, not the most intelligent, but the one most responsive to change.”

Science fiction Star trek characters are 300 years away in the future where the man reached a final steady state of science and technology.

Stephen Hawking depicts in his chapter 6 of The Universe in a Nutshell why future unfortunately will not be like this.

Beside some set backs like the Dark Ages after the fall of the Roman Empire the human race has been in a state of constant knowledge and fixed technology and in the last two hundred years the population growth has become exponential. Currently the rate is about 1.9% a year. 1.9 % may not sound very much but it means that the world population doubles every 40 years.

If the scientific and technological developments continue at present level in the near future accompanied by the exponential growth, world's population would be standing shoulder to shoulder by the year 2600 and the electricity consumption would make the Earth glow red hot.

History has shown that the present exponential growth can not continue indefinitely. So what will happen? One possibility is that we wipe ourselves out completely by some disaster such as a nuclear war once we have the technological power to do so. Even if we don't destroy ourselves completely there is the possibility that we might descend into a state of brutalism and barbarity like the opening scene of Terminator. But it will not be the machines that will be the dominant class.

There has been no significant change in human DNA in the last ten thousand years. But it is most likely that human race will be able to completely redesign it in the next thousand.

Clearly developing improved humans will create great social and political problems with respect to unimproved humans. Hawking makes it quite clear when he says “I'm not advocating human genetic engineering as a good thing,”

Human race needs to improve its mental and physical qualities if it is to deal with the increasingly complex world around. That’s why science fiction like Star Trek is wrong when you see the same human being as we see today four hundred years in the future.

“But I'm an optimist. I think we have a good chance of avoiding both Armageddon and a new Dark Ages.”

Bellow you will find some forecasts for the next events :

February 17 2009 - Analog television broadcasts are scheduled to end in the United States, as the Federal Communications Commission will require all stations to send their signals digitally.

2010 unknown date - The Space Shuttle program will be retired by NASA and replaced by Project Constellation. This project will include new space vehicles called Orion and Ares, capable of traveling to the Space Station, to the Moon, and eventually to Mars.

2015 unknown date - China is expected to overtake Japan as the 2nd largest economy in the world.

2015 unknown date - Hydrogen vehicles are expected to become affordable and ready to find at car dealerships by this year.

2020 unknown date - According to current plans and workings for Project Constellation, NASA should be returning Humans to the Moon.

2020 unknown date - Brazil is expected to reach the status of a developed country.

"By 2030, the world will have only enough food to feed everyone at the level of an Indian peasant (on average)." According to the Worldwatch Institute, as reported in Newsweek, September 12, 1994.

The European Space Agency hopes to land humans on Mars between 2030 and 2035.

Scientists predict Arctic Ice will completely melt in the summer of 2030.

2050 - The world's population is expected to reach over 9 billion.

By the year 2050, what the reports calls the "E7" economies — China, India, Brazil, Russia, Indonesia, Mexico and Turkey — will have outstripped the current G7 — US, Japan, Germany, UK, France, Italy and Canada — by between 25% when comparing GDP using market exchange rates to around 75% when using purchasing power parity (PPP) exchange rates.

By 2100, 12% (about 1250) of the bird species existing at the beginning of the 21st century are expected to be extinct or threatened with extinction, according to the Proceedings of the National Academy of Sciences, July 4, 2006.

By the year 2150, over 50% of schools in the USA or Western Europe will require classes in defending against robot attacks. - Alex K. Rubin.

2200 - If we stopped burning fossil fuels today Earth would gradually start cooling back down. It would return to current temperatures.
Postado por Luiz Pagano às 11:46 PM