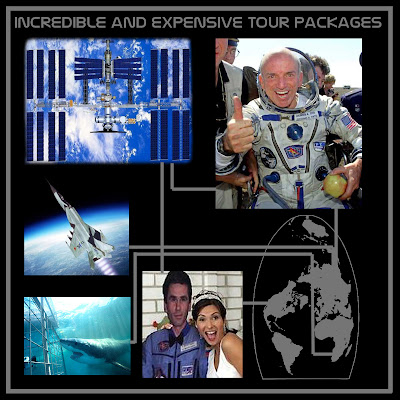 When MirCorp sent Dennis Tito, an American businessman and former JPL scientist to visit the International Space Station (April 28, 2001), they knew that they were making history as the only company to have sent paying passengers to space.Tito who became world’s first space tourist had paid for the tour package 20 million dollars to the Russian agency, which put him into orbit for seven days 22 hours on the International Space Station.

After that in August 10, 2003 Ekaterina Dmitriev was married by proxy in Texas to Yuri Malenchenko, a cosmonaut who was at that time aboard the International Space Station. It was the first "space wedding" in history. The luckiest couple
didn't have to pay for the party because Yuri was on duty.
But if you are not that lucky as Yuri, and don’t want to spend as much as Tito, you could fly a Mig or Sukhoi Fighter Jets in Moscow. The package includes a breathtaking 80,000 feet altitude fly on a MiG-25 at over Mach-2.4 speed. A company called flymig even offers real-time ordering with immediate online pricing .
Is air sport becoming boring? Ok, sharkbookings offers tour packages where you could have a dream date with Great White Shark. They say that so far, client’s most serious injury has been a sunburn .
Postado por Luiz Pagano às 10:38 AM

Its really amazing and sounds good too. thank you for sharing. fly military aircraft.