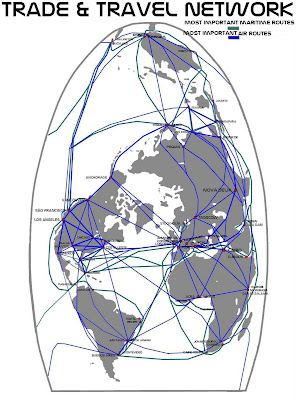 Civilization is completely dependent on trade to grow up, and travel makes that possible. The sea and waterways are the most widely used mode for transporting goods, but economic progress and mobility are in process of constant improvement by developing new routes and means of transportation.
A complex route network centralized in northern hemisphere provides more efficient and fast mass globe transport, mail and urgent freight.
Cargo ships uses almost the same main aerial routes, crossing the oceans port to port with basic commodities to the international Trade.

The world’s largest airport in area is the International King Khalid airport, in Saudi Arabia, with its total area reaching 225 square kilometers.

The American largest airport is the International Montréal-Mirabel airport, in Mirabel, Canada, with its area reaching 150 square kilometers.

The world’s busiest passenger airport is the International Hartsfield Airport in Atlanta, US. It sees an immense 88. millions passengers in one year, followed by International O’Hare in Chicago, Illinois, also in US that reached 77 million passengers in 2004.

Heathrow International Airport in London is the world’s busiest airport by international passenger traffic; it reaches 460 thousand landings and departures each year. 80% of its 67 million passengers are international flights.

The busiest domestic flight passenger airport is the Los Angeles International Airport. Almost 60% of its 60 million passenger traffic has Los Angeles metropolitan area as a destination or departure point.

The world’s busiest cargo airport is the Memphis International Airport, Tennessee, US. There operates the FEDEX operational center.

Bangda, Airport in Tibet is one of the highest airports in the world, with an altitude of 4,334 meters. At 5,500m, runway is the longest public use runway in the world.

Porto of Santos has reached the 39 position among the most busiest ports in the world, advanced 5 grades in comparison to the last year, total of 2.446 millions TEUS (unities equal of a 20’ container).