Year 6700 BC - A small hominid approximately 4.9ft tall leads a group of hunters/gatherers in the interior region near the beach of Cabeçudas in Santa Catarina State (at that time the sea level was higher than today).


We can call this little hominid ITA (shell / polished stone in Ancient Tupi).

ITA proceeds with a small group and finds a tiny Sambaqui abandoned amid a rich reserve of clam on a beautiful and warm beach. This small formation of 6 men led by ITA is sort of a landing party that aims to explore the surroundings after being expelled from a rich site a few miles away.

This Sambaqui seems to have been abandoned due to scarcity of mollusks, but ass time went on, no longer an depleted sambaqui and now shows some prosperity.

Itâ promptly goes back to this family group camped not far form there and tells the 200 members of his tribe about that good news. 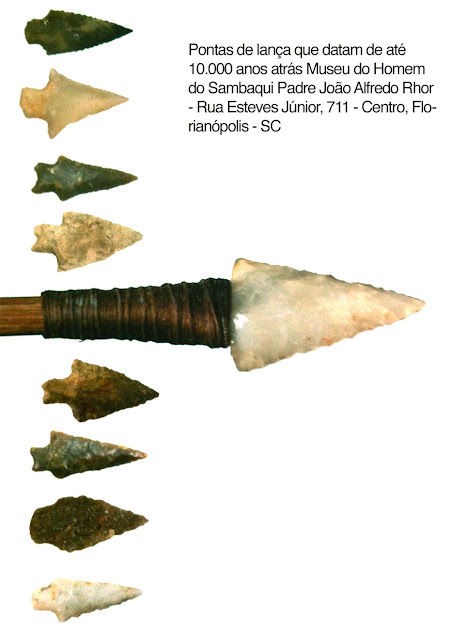 This is a fictional story based on the ultimate facts of archaeological research but it may well have happened. There is along the Brazilian coast and on the estuary of large rivers hundreds of archaeological sites of a semi-nomadic people who lived with a certain social organization called Sambaquis.

The Sambaquis (tamba'kï of Tupi, literally "mound of shells") are found throughout the Brazilian coast, also are also called shell mounds, casqueiros, berbigueiros, Sell Middens, etc. These deposits of historical material called the attention of the early settlers, were visited by Emperor D. Pedro II, eminent naturalist, who was enchanted by them were targeted for study by the University of São Paulo and attracted the attention of Paul Rivet, the legendary director of the Museum of Man, and "father" of modern American anthropology. On the southern coast of Brazil were studied by imminent the archaeologist João Alfredo Rohr.

These various archaeological sites of monumental dimensions that sometimes reach up to 30 meters high served as housing, shelter and even a cemetery. For a long time it was believed that it was only the fossilized remains of ancient peoples but recent studies indicate that these shell mounds were purposely built.

The study of these constructions provides an intricate material just like a puzzle that show us how it was the daily life of prehistoric men who inhabited the Brazilian coast.

Remains of fish and mollusks indicate that they were fishers and gatherers. "We found that most groups were sedentary and not nomadic, as previously thought," says archaeologist Paul DeBlasis, University of São Paulo (USP).
Remains of campfire and food indicate that the diet of Sambaquees came mainly from the sea. Some communities already grew vegetables, which brought an unexpected problem: corpses in middens from Rio de Janeiro, thad shown great incidence of caries that may be related to excessive consumption of cassava (Manihot esculenta).


The dexterity of Sambaquees was recorded in zoólitos, stone sculptures representing over two hundred animals and geometric figures. In some cases, artisans have made images of fish with such care that it is possible to recognize the species represented.

From the south-central coastal plain of Santa Catarina, between Passagem da Barra (municipality of Laguna) and Lake Figueirinha (municipality of Jaguaruna), 76 middens were mapped, of which 48 have already being dated.


The difference in cultural and in dietary habits, led to the conclusion that they were the work of a society distinct from the Tupi-Guarani, who then populated the entire coastal region of Brazil. Recent studies suggest that the middens have been constucted by people who lived on the Brazilian coast between 10 000 and 2000 years before present.

The systematic survey and dating of sites in Santa Catarina identified patterns of spatial distribution of middens in the region, as the sedimentary context of the time of construction, stratigraphy and age. Thus, they recognized themselves in the sites of the region: geological and geomorphological five contexts of location, three stratigraphic patterns, and four phases of occupation sambaquieira based on the number of sites and the type of constructive dominant pattern.

The wonderful work done by researchers at the Museum of Man from Sambaqui - Padre João Alfredo Rhor in Florianópolis – Santa Catarina promises to reveal even more secrets about the beautiful story of the first men who inhabited Brazil, long before the arrival of settlers.
Postado por Luiz Pagano às 10:51 AM