Why does Sugar Loaf mountain in Rio is called Sugar Loaf

The Portuguese who arrived in Brazil in the sixteenth century, believed that the hill Sugar Loaf in Rio de Janeiro was a piece made ​​by man.

Legend Says that it was the Father Anchieta himself who gave the name to the hill "sugar loaf" because it seemed like the cones obtained when refining sugar.

The way to produce sugar during the Renaissance was the “purging”, reffering to the old way to purge the sugar, i.e., separating the formed crystals from molasses, operation characteristic of the old sugar mills. In mills, the separation consisted in placing the massecuite obtained in metal pots molds that were shaped like an inverted cone with a lower hole through which the honey was drained by gravity.

To assist purging process it was necessary to keep the sugar with an appropriate degree of humidity, which is managed by placing one or more layers of mud or manure at the top of the mold, which were thoroughly moistened every five or six days. These operations had to be done carefully in order to assure the quality of the final sugar. Once drained molasses, after a period that could reach a month, depending on the weather, the sugar crystals were clumped together and were removed from the molds into blocks that had taken the geometry form of these metal molds. It kept resemblance to the production of bread, which was also baked in molds, and so by analogy, we started to call "sugar loaf" cone of crystals obtained after purging.

But the cones were not homogenous in terms of quality of sugar, nor were practical to pack and carry. Thus, once produced, were broken, by taking into account layers lighter and darker, corresponding to a sugar whiter the base of the cone and darker at its apex. This is another reason that it was a conical mold, as the region of the base of the cone, sugar whiter, was much more voluminous than the apex, where sugar was darker. The regions of the cone that had darker sugar were withdrawn through a machete in an operation called "mascavar" and brown sugar was called "muscovado" which also means "broken." The remaining block of white sugar was broken with the aid of cuttings and wood was then placed in boxes for transport. 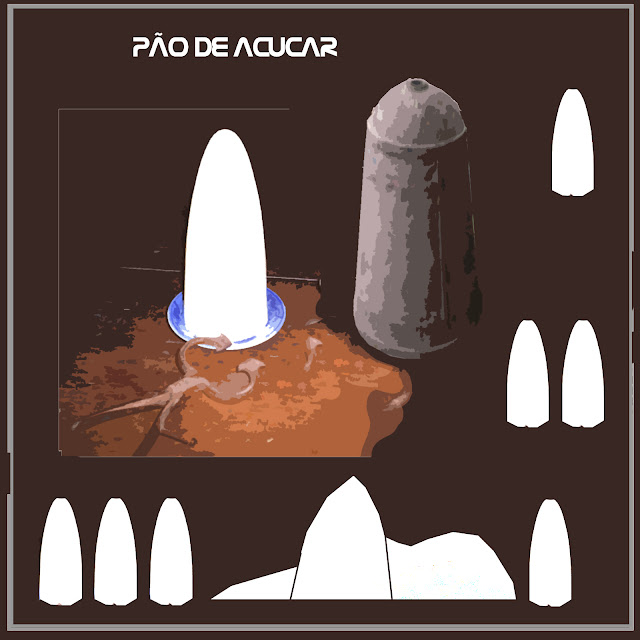 There were also special sugars, such as the base of the cone, carefully cut with a thickness of a few centimeters, was packed straw or leather, or trim shaped cubes in order to present. Molasses resulting from the purge was sent back to the pots, where during his concentration was beaten with the help of a slotted spoon and sugar originated the "hit", both white and brown sugar. This process is similar to "mixers" the current amorphous sugar refineries. The described methods have been used for hundreds of years, since the advent of sugar production. With the invention of centrifuging as a method for separation of sugar crystals in the first half of the nineteenth century, the system of purging the sugar by gravity employing molds was quickly abandoned and become curious the past, as well as the words which originated these practices.
Postado por Luiz Pagano às 12:51 PM