Not just another “BRIC” in the wall 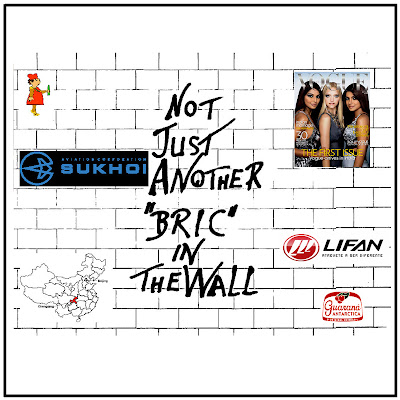 In November, 2001, at exactly six years ago Jim O’Neill, global economist at Goldman Sachs coined the term BRIC, to refer to the combination of Brazil, Russia, India, and China.

According to Jim the economies of the BRICs are rapidly developing and by the year 2050 will be amongst the highest developed countries of the world.

OK, but how about Russian, Chinese, Brazilian or Indian brands, movies, and the other stuff that the economic dominant leader should bring together. Does economic leadership really means cultural influence?

By the time that Goldman & Sachs first mentioned BRIC, me and my friends were expecting for another cultural evolution. Maybe in the future we could go to the movies to watch some Chinese or Brazilian spoken blockbuster, or go to a famous Russian vodka brand’s mega-party and even make lines in front some Indian high tech store to have the brand new Multi use Indian software.
Instead, things are not exactly as we expected to be, but we are experiencing some changes. Chinese company Lifan has been in the headlines here in Brazil since august 2006 when we heard some rumors about Lifans attempts to buy the BMW factory out of Brazil. The factory was set up by BMW and Daimler Chrysler in 1999 to make 1.4 and 1.6 engines for the South American market, Lifan also makes a 1.6L car so the two obviously go together perfectly, and if Lifan were to make its ‘new range of cars‘ then they’d have a whole engine making set up from the get go.

Lifan did try to purchase the BMW factory last year, however, the Brazilian government did not allow them to put the whole factory in boxes to be shipped to China and be reassembled at the Lifan factory. Lifan is no stranger to having overseas factories, in total it already has 18 factories outside of China but these are all producing motorcycles for various markets, Lifan only jumped in the car making game last year when it began to produce the Lifan 520 automobile.
In Wikinomics Don Tapscott and Antony D. Williams explain how Chinese government let Honda, Suzuki and Yamaha penetrate the country with license agreements, and how reverse engineering helped Lifan emerged as one of the most prosperous and fast growing companies located in Chongquing, one of the also prosperous and fast growing cities in central China:

“When it comes to motorcycles, China is king of the industry.

Motorcycle production has tripled to more than 15 million from five million vehicles a year since the mid-1990s. That's about 50 per cent of the global pie, making China the world's leader.

Meanwhile, the price of Chinese motorcycles built for the rapidly expanding Asian export market has dropped to $200 (U.S.) on average from $700. Not surprisingly, Chinese firms such as Lifan, Zongshen, and Jialing are now displacing well-known Japanese competitors such as Honda, Suzuki and Yamaha as the vehicle providers of choice.”

Yin Mingshan the 69 year old Chinese pioneer behind Lifan accomplishments said that Lifan is planning to IPO later this year on the Shanghai stock exchange to raise funds to further its car making ambitions.
Not so apart from Paris-New York fashion circuit the Wills Lifestyle India Fashion Week is a fashion show held in New Delhi annually since 2000. This year week from September 5 and September 9, 2007, India Fashion week featured some of the top fashion designer ranges in India including that of The Glass House range by Kavita Bhartiya.

The numbers of Indian fashion designers hired by the biggest of global brands is increasingly growing as well as the number of the domestic designers who have also set up boutiques in some of the important fashion destinations of the world.
Last September 20th India’s newsstands woke up with some beautiful faces printed on the cover the brand new Vogue India ). Featuring Bollywood stars Bipasha Basu, Priyanka Chopra and Preity Zinta, local supermodels MoniKangana Dutta and Laxmi Menon, and Australian supermodel Gemma Ward, shot by fashion photographer Patrick Demarchelier.

The inaugural issue of Vogue India is expected to be more colorful and more vibrant than the western models, according to Alex Kuruvilla, managing director of Conde Nast India. He also expects it to draw attention to Indian designers, Indian photographers, and even Indian models.

The name Guarana (pronounced gwa-ra-naa) a berry that grows in the northern parts of Brazil comes from the Guarani tribe that lives in Brazil. Guarana plays a very important role in Brazilian culture, as this herb is believed to be magical, a cure for bowel complaints and a way to regain strength. Guarana-based drinks are common in Brazil and are getting more and more popular all over the world. Some companies says that guarana could be a more important Brazilian export product than soccer players!
Pepsi and Coca Cola made their first moves some years ago when decided to product their own guarana soda varieties. Pepsi tried to market 'Josta' in the US in 1997 in the U.S., but discontinued it when it didn't sell in large volume; Coca Cola still sells 'Kuat' in Brazil (with some success). But as Brazilian people well know, imitation brands still can't compete with the original Brazilian brands - the genuine flavor of guarana is sometimes absent and apparently replaced by an overdose of sugar. Guarana lovers, mainly Brazilians says that the authentic Guarana is Brazilian Guarana.
According to AmBev Guaraná Antarctica is an authentic brand, with unique and original flavor of Brazil . It is the second soft drink brand most sold in the country and absolute leader in its segment. Currently, it is ranked among the 15 best-selling brands in the world.
Last September 26th the new civil plane was unveiled at a Sukhoi military factory at Komsomolsk-on-Amur in Russia’s Far East on September 26.

President Vladmir President Vladimir Putin’s bid to revive its once mighty aviation industry on September brought out its first modern commercial airliner for the global market - the Superjet.Built by the former Soviet Union’s largest warplane maker Sukhoi.
Regional jets is an $8 billion market dominated by Brazil’s Embraer and Bombardier of Canada, though that is relatively small compared with the $60 billion spent annually on big jets made by Boeing and Airbus. “This is a very important program for Russia because it means the rebirth of its aerospace industry,” said Marc Ventre, executive vice-president of aerospace propulsion at French conglomerate Safran.

Maybe it is the first time that you hear about some companies mentioned in this article, but surely in the next ten years those BRIC’s brands along with far more others will be the headlines of Wall Street Journal.

If don’t at the WSJ, they will surely will be on the top of the front pages of Brazilian Gazeta Mercantil, the Russian business daily Kommersant, China Business News (CBN) or Indian Standard.
Postado por Luiz Pagano às 6:46 PM