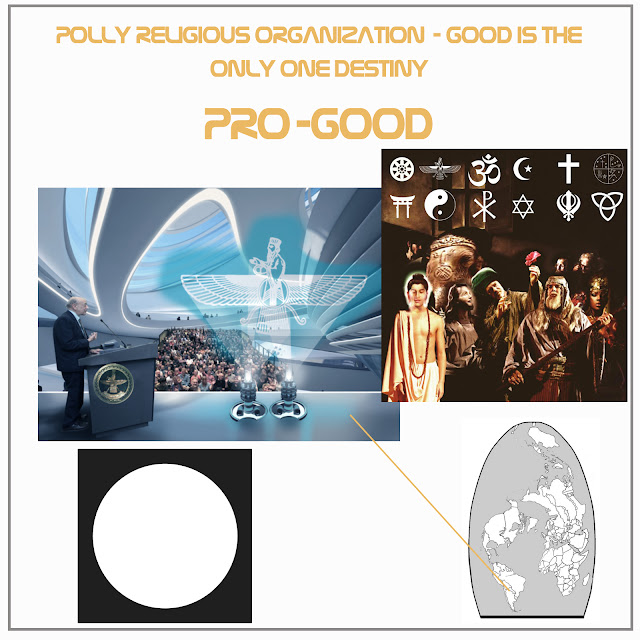 If I were to write and speak my mind today, perhaps I would be misunderstood and criticized by those who defend their convictions - the best way to pass on the OMNIreligion theory is to make an AFD (Article of Future Days) - in this way, free from bias, it makes it easier to pass my ideas on - here's a story that might as well have been written on October 27, 2066.

"Inaugurated today, October 27th, 2066 the headquarters of the Pro-Good Omnireligion centre, (acronym for Polly Religious Organization - Good is the Only One Destiny) near the town of San Luis, Argentina (located exactly at the coordinates 33°s 66°w, according to specific numerological indications). 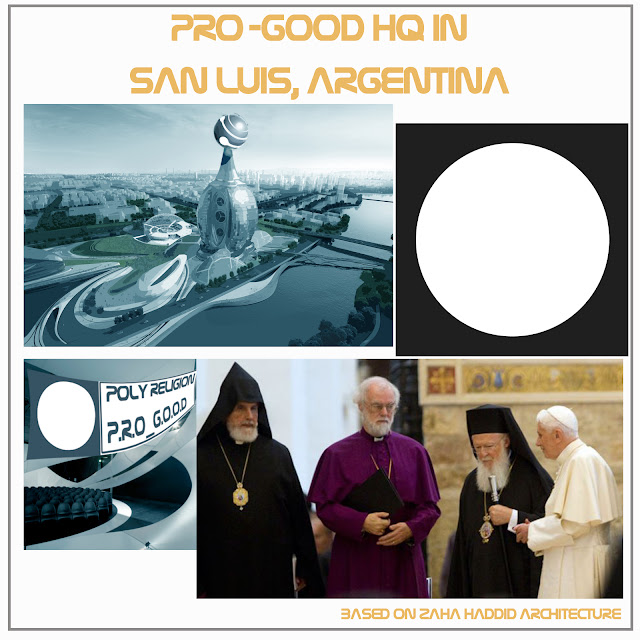 As its name says Pro-Good is multi religious nucleus committed to celebrating the harmony among world religions. Today the world is united by its religions in this astonishing complex of buildings, but they have long been the triggers for wars and misunderstanding. Since the murder of Hypatia, director of the library complex of Alexandria by religious priests, deaths occurred between Christians and Muslims in Jerusalem routes, disagreements between Jews and Palestinians in the Middle East, and even terrorism separatists, that by an absence of a state, commit crimes in the name of their religion, decided to bring an end to the barbarity in order to live the rest of their lives in peace.

The Pro-Good was first suggested by a group of omnireligious children in primary class at The Montessori School of New York, in the year 2036.

During a lecture to students of religious affairs a group wrote on a poster "Why do religions, that should lead man to divine wisdom has caused many deaths in bloody wars over the course of the history of our civilization?". Unresponsive, the speaker started to cry when a boy from the same group of students suggested the creation of a global organism regulator for the religions, in order to prevent its integrants to commit atrocities in the name of God.

Unlike adults, children are free of bias. That generation of children of 2036 grew and conceived the religious complex of Pro-Good, which opened today in the beautiful fields of Argentina.


Exactly eighty years ago on October 27th 1986, Pope John Paul II held a meeting of prayer, fasting and pilgrimage with religious leaders from various regions of the world in the city of S. Francis of Assisi, Italy.

The Cardinal Roger Etchegaray, is moved when recalling the historic day:

“In the face of Basilica of S. Francisco - continues the then President of the Justice and Peace, organizer of the event - which, in the cold, each one of us were looking to lean against the neighbor (John Paul II was next to the Dalai Lama), when some Jews jumped over the stage in order to offer olive branches to Muslims, I also found myself wiping my tears”.

The emotion that was already big reached its peak when by the ending of that gray morning; a rainbow appeared over the city of Assisi. Religious leaders glimpsed a strong call to fraternal life: no one could doubt that the prayer had caused a visible sign on skies of harmony between God and men”.

This possible article of a newspaper from the future describes what should inevitably happen in the globalized world. It is impossible not to be 'Poly Religious ' here in Brazil – where at the same day, you may go to the Catholic mass with your mother, at a ‘terreiro’ of Umbanda with a friend, to a bar mitzvah of your nephew, watch a Buddhist event and even go to pick up the kid at a Mormon party.

Article 18 of universal declaration of human rights says; ‘Everyone has the right to freedom of thought, conscience and religion; this right includes freedom to change his religion or belief, and freedom, either alone or in community with others and in public or private, to manifest his religion or belief in teaching, practice, worship and observance’.

How should function the Pro-Good

Differently from what happens with temples of other religions, Pro-Good complex is run by an atheist CEO (religious tolerance also implies in the tolerance to the lack of religious beliefs).


The atheist leader is a perfect choice since it is religiously neutral and aims to manage the accounts of the organization with maximum transparency, based on market economy model.

The philanthropic activities achieve a stunningly big number of donors and have branches worldwide.

Another major step towards fairness of religious activities is the training of applied psychiatrists, psychologists, medical professionals from several other areas, and exempted energy therapists, who work in every religion in order to provide proper treatment to the adherents who have been led to religion by various levels of health imbalances. Religions should be worshiped in a healthy way, with the purpose of understanding the spiritual paths and should not, in any way, exploit its adherents.

Only the adherents, who have their mental/spiritual health duly attested by these professionals, are able to make financial donations.


In the main building of the complex there is a huge file with databases, books and documents of all religions in the world for free consultation.

Four large altars are always crowded with worshipers who listen and interact with religious leaders who alternate the agora (the stage of each altar).

There are also the ‘conciliators’ that has the sole purpose of avoiding heated debates based on the basic principles of Pro-Good - harmony, tolerance and brotherhood.

Every adherent is encouraged to take the best from presented messes/presentation of different religions through 'faith by contesting' and create their own 'religious persona' with individual prayers and personal reflections. Are also encouraged to respect the belief of the next in order to have their beliefs respected.

The headquarters near São Luiz area also run subsidiaries around the world as well as the proper offices of social works.

The idea is not to amalgamate all religions into a global cluster of beliefs and exterminate regionalism and its socio-cultural bonds. Rather, the Pro-good encourages the rescue of the cults in their original languages, with a view to preserving and propagating the culture of the people.

Another very interesting area is that of religious archeology, ancient rites such as those worshiped in ancient Egypt and Mesopotamia were meticulously studied and worshiped in their original language and proper way.

The benefits of Pro-Good to humanity are numerous, and I have no doubt that an institution like this should to be declared by UNESCO as human heritage as soon as it is established.
Postado por Luiz Pagano às 10:31 PM