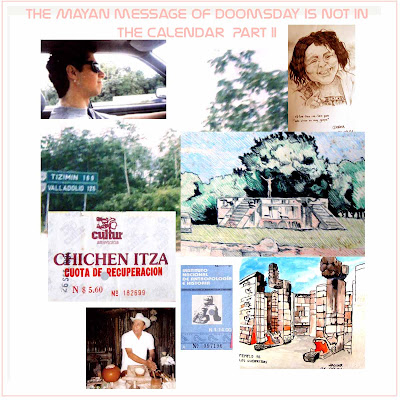 As we have seen in the first article The Mayan message of doomsday is not in the calendar, the doomsday of 2012 comprises a range of eschatological beliefs which affirm that cataclysmic or transformative events will occur on December 21 or December 23, 2012, which is said to be the end-date of a 5,125-year-long cycle in the Mayan Long Count calendar. These beliefs may derive in part from numerological constructions, archaeoastronomical speculation, alternative interpretations of mythology, or alleged prophecies from extraterrestrial beings. Thought, we could interpret the message of doomsday in other directions. Some Maya tribes took advantage from lessons that they have learned from the effects their own mistakes, and from mistakes of the others to prosper, one good example is Milpa agriculture.

We have also seen that deforestation coincided with a dramatic drop in the Mayan population, but they have learned one of the most advanced and simple form of agriculture – The Milpa

Milpa agriculture - A Milpa is a field, usually but not always recently cleared, in which farmers plant a dozen crops at once including maize, avocados, multiple varieties of squash and bean, melon, tomatoes, chilis, sweet potato, jícama, amaranth, and mucana, Milpa crops are nutritionally and environmentally complementary. maize lacks the amino acids lysine and tryptophan, which the body needs to make proteins and niacin; beans have both lysine and tryptophan, squashes, for their part, provide an array of vitamins, avocados, fats. The Milpa, in the estimation of H. Garrison Wilkes, a maize researcher at the University of Massachusetts in Boston, "is one of the most successful human inventions ever created.

To understand the concept of Milpa, we have to understand the concept of four based Mayan cosmography. A traditional Maya house is constructed over four sticks or columns, each column represents a cardinal direction – north represented by the white maize, south the Yellow maize, east the red one and west the black one. The firmament is supported by the same four columns. The city of Uxmal for example, represent the basis that support Orion constellation. 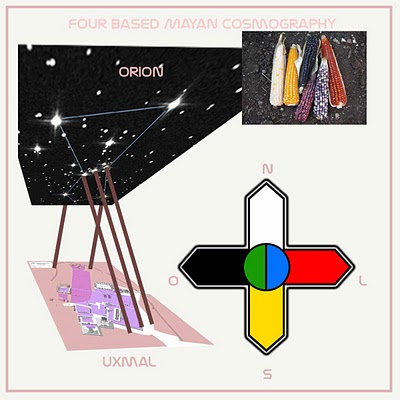 Number four is constantly used, even in Milpa agriculture, they believe that the period of eight years is perfect for the earth to be fertile again. They divided this period in four bases of two years. By the first period of two years an area of forest is selected, and the vegetation is cut and allowed to dry after some period of time, the residual dry vegetation is burned. After two years starts the second period in which they plant Maize crop. After two years the start to plant beans in the same field, the last period of two years they permit the forest to grow up again.

These brand new techniques such as Milpa were transmitted by word of mouth from city to city. The city of Cancuén which means place of serpents, was located in the region of Pasión river subregion of the central Maya lowlands in the present-day Guatemalan Department of El Petén. The Mayan city-state is notable for having one of the largest palaces in the Maya world. It was a major trade center, specializing in jade, pyrite and obsidian. Its strategic position on the Río Pasion helped it dominate trade in the region.

They have coordinated commerce and information. Trading commodities as obsidian they had to deal with the elite of their time, and they discovered that high quality information that arrived from elite could be a very important asset.

Cancuén was at the top of its prosperity, Taj Chan Ahk, one of the city's most powerful Ahaus (Mayan political, religious and military leaders) built the city's palace in 770 A.D. 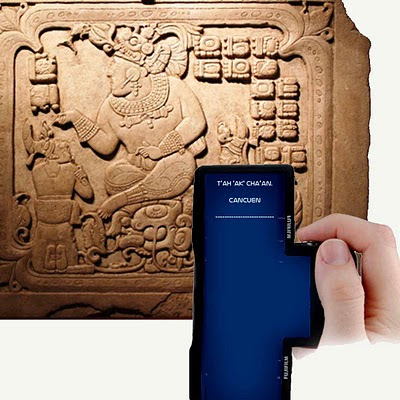 By that time, Ahaus use to attack neighbor cities and capture enemies alive for later rituals of sacrifice in order to consolidate their power. The destiny of the enemy was often decided in a “Juego de Pelota”, the loser and even the winner (we still don’t know why) had his body painted in blue and was sacrificed. This sort of war or invasion used to have pre-arranged dates and hours to occur. A massacre occurred in Cancuén around 800 A.D, Investigations have shown that the bodies, including the city's ruler at the time, Kan Maax, had been executed and dumped in a cistern,

As traders were no more able to use Passion River as trade route, they start to use other routes and took their knowledge to other cities such as Tulum and Xcaret (the original name of Xcaret was p'ole', from the root p'ol that means "merchandise" or "deal of merchants", which gives an idea of the economical relevance of the site).

After that, Maya culture survived Hispanic colonization, deceases brought by Europeans and truism in the region. Today’s Maya culture adopted Milpa as a way to live in harmony with nature and many directors of archeological sites are Maya descendents. Prophecies of 2012 doomsday could mean the end of Maya civilization through erosion caused by westernization and intermarriage. Their cultural purity and way of life could be under a threat. But this is not the first time they face that sort of menace, Mayan know how to survive and shine.
Postado por Luiz Pagano às 7:47 PM