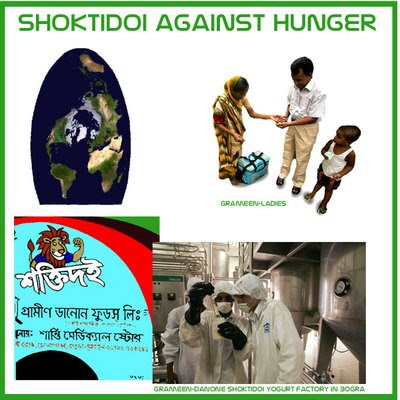 Nobel Prize winner Muhammad Yunus along with Grameen Group and the French yogurt company Danone are doing an extremely good work in order to promote a world free from hunger. Shoktidoi (Shakti, शक्त - means sacred force, power, or energy)is an immunity-enhancing and energy-boosting yogurt. It has been developed in an ultra-modern research center in the Paris suburb.

Danone faced a different kind of innovation challenge when it teamed up in 2005 with Grameen Group of Bangladesh to develop a yogurt for some of the poorest consumers in the world. The result was a product that would retail for less than 10¢ per serving yet provide 30% of the minimum daily requirement of iron and other key nutrients to poor children.

It is manufactured in a small, environmentally friendly factory, with a low-tech, labor-intensive supply and distribution network—the kind of small-scale "social business enterprise" conceptualized by Grameen's founder, Muhammad Yunus.

Danone’s managing director Emmanuel Marchant and Grameen Bank are developing something that aims to create a unique investment fund, Danone Communities, managed by a leading European bank and aimed to attract investors who want to promote new models for development while getting at least a minimum return. The fund will help finance new Grameen Danone plants in Bangladesh and new projects on other continents to reduce community poverty. It seeks to benefit the community in general by creating more than 1,000 livestock and distribution jobs including the “Grameen Ladies” who sell Shoktidoi yoghurt door to door, while still earning a profit.

State of the art plant design and financing were needed to build the plant in Bogra, 150 kilometers north of the capital, Dhaka. The plant is using compost-generated gas, uses biodegradable packaging, reduces automation to a minimum, and copes with a lack of refrigeration between milk collection points and the plant. The product recipe was adapted to use locally-produced date molasses rather than expensive imported sugar.

The world's most exciting, fastest-growing new market is where you least expect it: at the bottom of the pyramid “BoP”. Collectively, the world's billions of poor people have immense entrepreneurial capabilities and buying power. You can learn how to serve them and help millions of the world's poorest people escape hunger and poverty. in economics, the bottom of the pyramid is the largest, but poorest socio-economic group. In global terms, this is the four billion people who live on less than $2 per day, typically in developing countries. 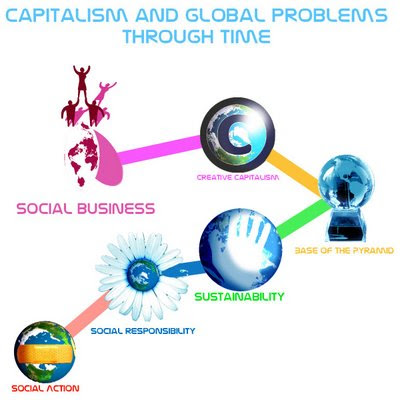 Capitalism and Global Problems through time

Find now some of different initiatives through time that private sector has conceived to solve global problems:

1 - Social Actions - Is a concept developed by Max Weber (Gesammelte Aufsätze zur Soziologie und Sozialpolitik - Collected Essays on Sociology and Social Policy, original - 1924) that explores interaction between humans in society. The concept of social action is used to observe how certain behaviors are modified in certain environments. The impact of social action is clearly seen in the development of norms and customs and everyday interaction between people;

2 - Social responsibility - Is the obligation of organization management to make decision and take actions that will enhance the welfare and interests of society as well as the organization. The term was first used in 1987, through the report of the World Commission of Environment and Development (WCED);

3 – Sustainability - In a general sense, is the capacity to maintain a certain process or state indefinitely. The first book with the title Ecological Economics was published in Europe by Juan Martinez-Alier (Blackwell, Oxford, 1987). It traces the history of ecological critiques of economics since the 1880s to the 1950s;

4 – Bottom of the pyramid - C.K. Prahalad suggests in his book “Fortune at the Bottom of the Pyramid, 2004” that four billion poor people can be the engine of the next round of global trade and prosperity;

5 - Creative Capitalism - is a term popularized by American entrepreneur and Microsoft chairman Bill Gates at the 2008 World Economic Forum in Davos, Switzerland. The ideology calls for a new form of capitalism that works both to generate profits and solve the world’s inequities, using market forces to better address the needs of the poor;

6 - A Social Business - is one which aims to be financially self-sufficient, if not profitable, in its pursuit of a social, ethical or environmental goal. Dr. Muhammad Yunus is a key proponent of the social business model, seeing it as a mean to eradicate poverty and to influence the future of capitalism;
Postado por Luiz Pagano às 2:50 PM