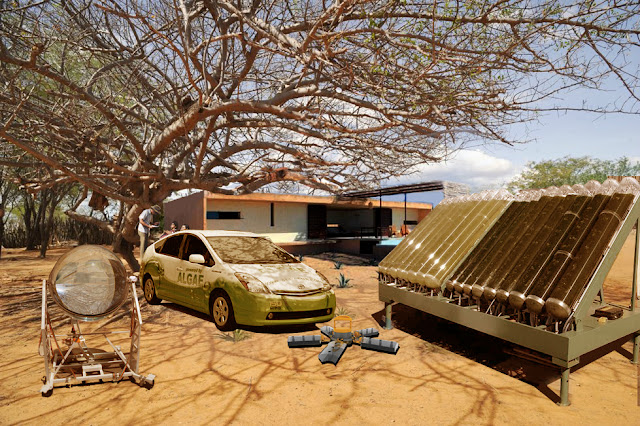 Some regions such as the Brazilian Northeast, has suffered from great evasion, but remains inhabited thanks to the strong and resilient local people. NIMPS and Blemya present here some tips that could help these people suffer a little less. 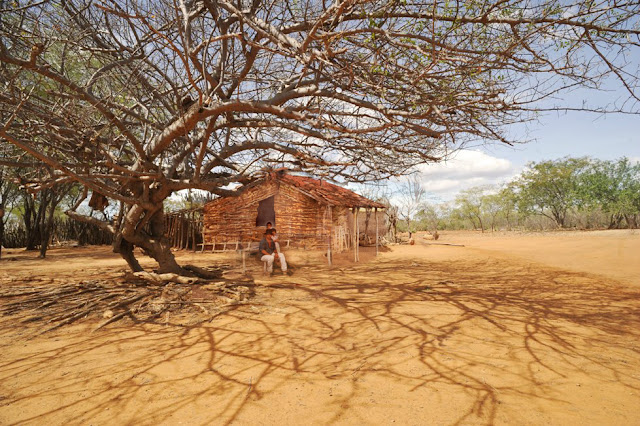 It is noteworthy that the objective of this article is not an attempt to change cultural features and/or interfere with issues of ethnic identity, we simply extrapolate how would these isolated communities be better served by some clever ideas of productivity and low environmental impact.

Now, Check out some “almost impossible solutions” for the suffering inhabitants that live in the doughtiest northeastern region of Brazil.

The good news for this local humble farm in the middle of the drought is that a group of engineers of Blemya and NIMPS analyzed the scarce local resources and have implemented a number of gadgets to transform the lives of this couple with their two young children.

The family new income will be the production and sale of fuel oil from algae, grown in special solar greenhouses.

Some of the oil will fuel the 'Alageus' a car designed to run with this oil.

A solar hydraulic pump will draw water from deep artesian wells and will be purified, also with the use of solar energy.

Computers, televisions, refrigerators and all other electrical appliances in the house will be powered by the newest wind and solar power generators.

As we saw this humble rural family went from suffering poor to prosperous workers through the use of global intelligence coupled with a willingness to work. 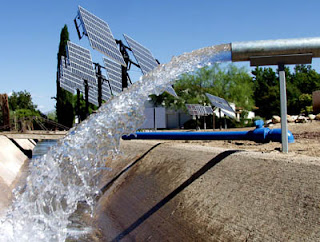 The water pump systems have solar panels (Photovoltaic cells) that move automatically to track the movement of the sun, for maximum efficiency. Water is drawn from the source through a “straw” by a pump that is powered by the solar panels. 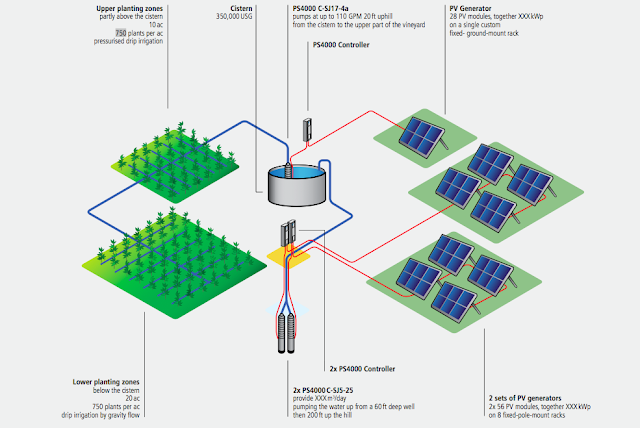 Jason Lam, a student designer at University of New South Wales, shows a water purifier that uses the power of the sun to make water drinkable. It's intended for places with limited resources where water-borne diseases are prevalent, helping to save lives with the power of the sun.

Solaqua utilises ultra-violet and infra-red rays from the sun to eliminate pathogens within contaminated water. Raw water is first passed through a sari cloth filter to improve efficiency of solar water disinfection (SODIS). A five tap funnel fills five specially designed bottles to obtain ten litres of water. By spreading and laying the bottles on the ground, the transparent bottle surface allows maximum exposure to UV rays. The black, back surface of each bottle absorbs heat, while reflective inner surfaces reflect UV rays within the water itself.

The design uses plastics, which seems problematic for a device that will sit all day in some very hot sun. Lam states, though, that plastics were chosen to keep it lightweight so it can be carried to where water is available, and so that each part can be replaced and recycled as needed. That doesn't mean, though, that the parts will be long lasting, which would be a key element to a design going to rural areas. 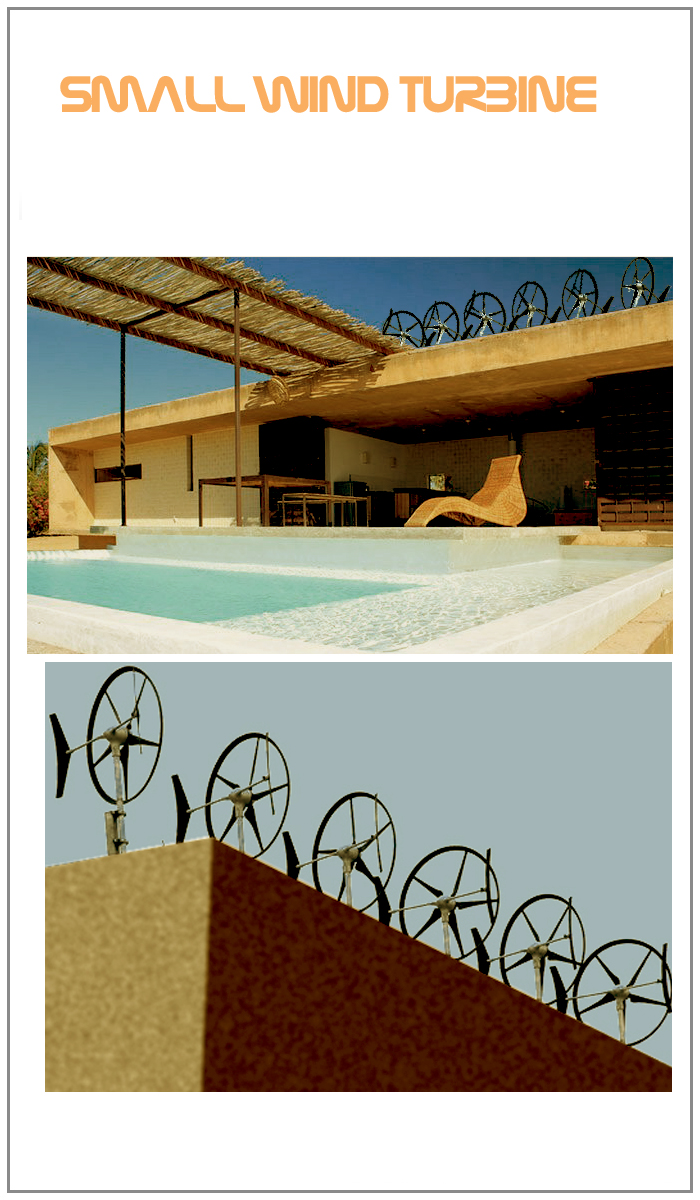 A lot of research and focus is given to large horizontal wind turbines because they're able to generate so much energy individually and in large wind farms, but small wind turbines in more urban settings can still pack a punch if they're designed and positioned in a way that lets them generate the most energy. But what designs are better and where exactly on a roof is best? That's exactly what new modeling software from researchers at Murdoch University is being used to figure out.

“A knowledge of turbulence intensity helps predict the load on the machine, so it informs the required design strength of turbine components, including the tower and blades. We need accurate data to ensure turbines are strong enough for all conditions,” said PhD student Amir Tabrizi.

Tabrizi is working on developing a three-dimension computational fluid dynamics model built with OpenFOAM software that will incorporate various wind environments and factor in things like height, prevailing wind directions and the effects of different building shapes. So far, he's found that rooftop and forest sites both face far more turbulence than the current design standard for small wind turbines, which is based on open space installations, equips them for. 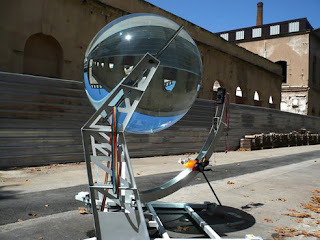 When talking about concentrated solar power, we usually mean focusing the sun's energy from a large area into a smaller area, which generates a lot of heat that can be used to produce electricity. But a prototype for a different method of concentrated solar power focuses the sunlight onto a photovoltaic panel, and is said to be able to boost efficiency by as much as 35%.

Barcelona designer and architect André Broessel's ß.torics (Beta Torics) spherical lens solar generator uses a large water-filled glass ball to concentrate the sun's energy (by up to 10,000 times!) onto a small PV panel. His design also integrates a fully rotational tracking system to optimize the solar energy gain throughout the day, and is said to be able to be mounted on or in walls for use with either PV panels or solar thermal applications.

This is a beautiful device, but there's at least one big question that comes up when discussing the idea of integrating these units into buildings, which is the weight of these water-filled lenses, which could easily outweigh any other options for rooftop or wall-mounted solar energy devices. Other limiting factors in producing these might be the high cost (and the technology needed) for turning out optical grade glass balls of a significant size, such as the one in the prototype, and the high temperatures generated on the surface of the PV panels.

Viable Oil Replacement Must Be Synthetic, Not From Nature, Venter Says 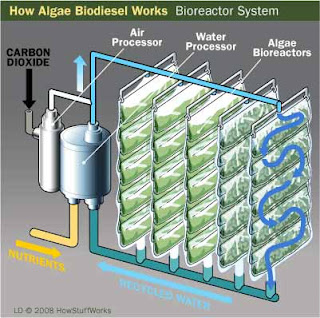 A recent announcement from celebrated scientist and entrepreneur Craig Venter suggests that the plan to create the world’s first mass-market biofuel has stalled in its tracks. In a landmark partnership between Venter and ExxonMobil, Venter and a research team planned to develop a commercially-viable biofuel from algae.

Since algae naturally generates oil in higher amounts than biofuel crops, it was believed algae could be the key to developing a sustainable biofuel. 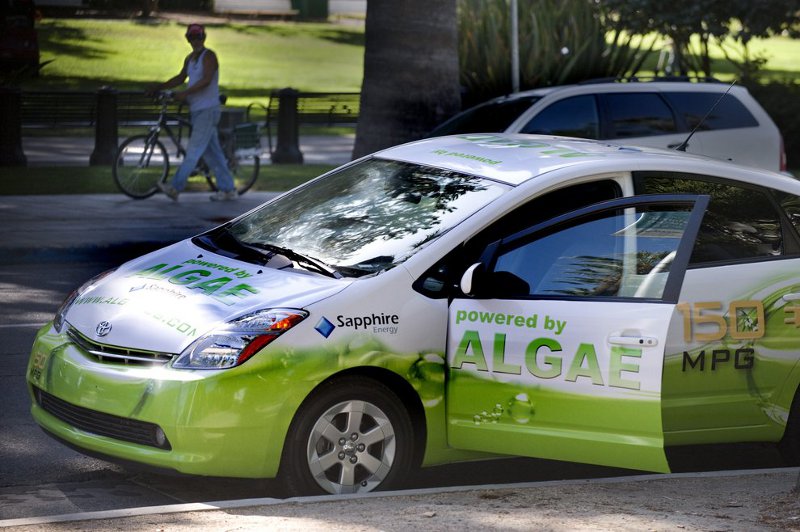 Josh Tickellis the creator of the Veggie Van Organization and director of "Fuel," which was honored as best documentary at the 2008 Sundance Film Festival.

Tickell created the Algaeus mobile, As the name suggests, it's the world's first algae-powered plug-in electric hybrid vehicle. Essentially, the Algaeus is a tricked-out version of the already fuel-efficient Prius. Tickell added a nickel metal hydride battery and a plug to the hybrid car. Instead of gasoline, the car's engine runs on algae fuel.

The set-up is so effective that the Algaeus can run on approximately 25 gallons from coast to coast.

Developed by the green startup company Sapphire Energy, algae fuel is produced on a farm in the deserts of New Mexico.

Proponents of algae fuel claim that it has the potential to be a new source of 100 percent carbon neutral energy that won't require changing the country's current energy infrastructure..

Here is desert house with low maintenance based on the ones designed by Gracia Studio. This house featured with outdoor swimming pool and opened living room. The materials used in their construction are carefully chose to withstand hurricane and also need a minimum maintenance. Basically the house is one open floor plan for the common areas and the bedrooms are more enclosed to have privacy. Both houses have similar structure. It is composed of concrete matching the natural color of the local dirt. Some walls are covered with “talavera” in order to bring a traditional “Nordestina” architecture into its design. The floor plan is very easy and flexible because of the linear structure of each house. The simplicity of the floor plan matches the simplicity of the design of the exterior making the place perfect for enjoying the nature.
Postado por Luiz Pagano às 6:14 PM